The Dutch Forum for Democracy (FVD) defends the interests of the Netherlands.

It advocates an exit from the European Union, as it wants to restore the full sovereignty of the Netherlands.

In order to put an end to mass immigration and Islamisation, the Netherlands should take back control of its borders and decide on its own policy regarding immigration and asylum.

Dutch taxpayers are the biggest net contributors in the EU, but don't get value for their money.

The Netherlands should get out of the euro zone. FVD advocates strong social protection for the Dutch people as well as a tough policy on crime and terrorism. 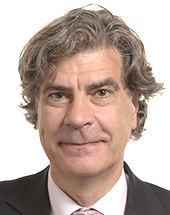 Marcel de Graaff was born in Rotterdam in 1962.

He belongs to the EP-Russia interparliamentary delegation, and is a substitute member of the Israel delegation.

The previous term of the European Parliament, Marcel de Graaff was delegation leader of the Dutch Party for Freedom.

He chaired the PVV in the Dutch High Chamber from 2012 to 2014. Before that, he was an IT & Operations consultant from 1989 to 2014. He studied Theology at Radboud university in Nijmegen.