Danish People´s Party is a national conservative party founded in 1995.

The party has enjoyed great influence during the last 20 years because of its support to different minority coalition governments of liberal and conservative parties. The party is currently in opposition to the Social Democratic government.

The DPP's stated goals are to protect the freedom and cultural heritage of the Danish people, to maintain a strong welfare system for Danish citizens, to work against Denmark becoming a multi-cultural society by limiting immigration, to protect Denmark and its sovereignty from EU-federalism, and to promote entrepreneurship and economic growth by strengthening education and encouraging people to work. 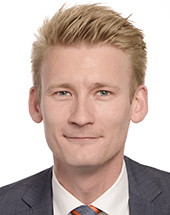 Peter Kofod (born 27 February 1990) is a Danish politician who was elected as a Member of the European Parliament in 2019 for the Danish People’s Party.

In 2015 he was elected from the Southern Jutland constituency (area of Aabenraa) to the Danish Parliament.

In 2015 he educated from University College South Denmark as a Teacher.